skip to main | skip to sidebar

A 4:30am departure in the cold wet air did not alert my foggy sleepy mind of the beautiful sights I would cherish at sunrise. That feeling, and the thoughts running through my head. Happily I realized how much I had missed the fog. I always associated the fog with the ocean for it is where I saw it for the first 18 years of my life. I've not seen much fog in the following 18 years except when on vacation either home or near the ocean, as well as strange mountain scenarios. It captured my thoughts for a while and activated somewhat a sense of inspiration and adventure. All alone and headed to an adventure caused only by an obsession with blueberries. It's amazing the experiences you'll have from something so minuscule. I once went to a city only because it had my brother's name and what I saw and found out there I could not of imagined. I have no regrets to letting a simple name, word or tiniest of viking berries inspire. Twists and turns on backroads were such a pleasure. The roads less traveled are the most traveled for me. I love them so. Old houses, clapboard, chippety paint, farms and fields. True happiness. The fog seemed to melt and bring me the poofiest of clouds.

I parked at the end of a long shady dirt road. There was no reception, the air was cool. Was I truly ready for this? Walking towards the unknown, questioning myself the entire time. This adventure was so many firsts. I've been atop many mountains. Most larger, taller, some by horse, by car, grandma lives among them but here... it was me! Me, myself and I. All alone. The silence was unnerving and lasted for about an hour and a half. It seemed in impossible in the mountains and forest. I could not understand. My first sound almost made me fall over. “Well played little chipmunk”, i rolled my eyes at it, although i could not see it, “well played” I nervously laughed at myself, "what have you gotten yourself into you stubborn girl?"

Right away, it was straight uphill. I surprisingly did not experience any pain but I got myself in check when I noticed a little heavy breathing. It was not a race. I had all day. Slowed down my steps, being aware of them all, conscious of my placement. It was a true hike. Many times my arms came into play, my entire body had to work together. It was so nice to not just stroll along a path which may of been wrongly titled “trail” and get upset over the fact it did not feel like a workout at all. Every part of me got exercise on this climb. Mind, heart and emotions, as well as body. I never imagined myself going up a mountain alone, one called blueberry. Oh who am I kidding? I thought of all the ridiculous adventures I've experienced and predicaments I could of ended up in and kept pushing and pulling.

At my first clearing and view, the smell changed. Stop and smell the roses changed. It was stop and smell the blueberries, which I like that term better. You could still smell them, the bush, although the season had come to an end. If I had waited any longer in this month I would of been sadly disappointed. Who does not want to pick blueberries right where they belong? Such a strong little blue creation, grows right from northern rocks. Very viking. Odin gave me 3 blueberries which I saw and ate. Perhaps only one living soul may understand that. Could not be more thankful. 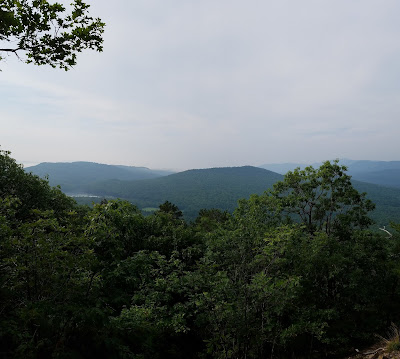 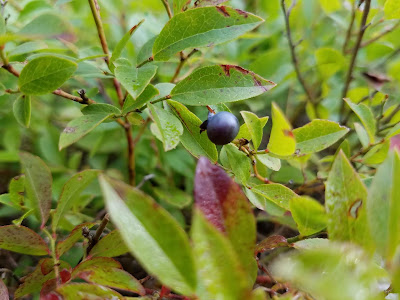 I was not quite sure if i had reached the summit or just a great spot for a view. Speaking of summit I was "rescued" by a dog named Summit. Well, or so he thought. Came right at me and sat down next to me to kiss me. The look on his face, a smile so proud. He looked at his older lady owner "look mommy I saved her, I'm helping!" Such a sweetheart. He had a drink and found some shade and on he went. I continued on, to what I believe was the summit, finally. Remembering what I had read in one of the only articles that seemed to truly be knowledgeable about this hike, in a specific direction, I came to a crossroad where I would choose to go down blueberry. I went down straight into the forest. Soon I was climbing again, almost as sharp as my climb up blueberry which did not make sense. I came to a clearing, then questioned if I had truly even seen the summit. Things started feeling strange as it dipped down again and then climbed with a different look, which seemed truly strange. I bumped into summit and his mom again. She pulled out a map. She had no idea of the pool I was speaking of although she frequents these mountains... hence summit as her dog's name.

I learned I had climbed a tiny middle mountain and was on my way up another. I did not want to end up at the top of that one or even down the other side, for the only way back to the car would of been going up those 3 again and no doubt feeling like 6 by the end of the day and perhaps running into some trouble. I gave summit a good ear rub, wished them well and went on my way. I turned myself around and went back to the summit of blueberry where I took a little break to take some photos, have a snack and take a picture of the old fashioned yogi bear type wooden sign. That gave my heart such pleasure. I started my descent. Right away into the woods, like covered tunnels in The Secret Garden. There were many branch offs and overlooks, which I chose not to take, for I had a swim in mind. It soon started to go down at a sharp angle which was a little strenuous on the knees, but I was thankful I was not going down in the direction where I had climbed. I definitely had chosen the right way for my body and made sense to swim after a hike, not before. 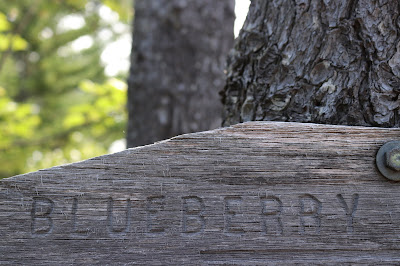 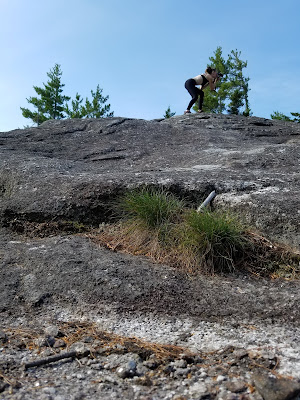 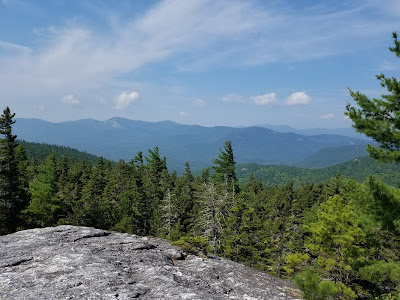 I met many groups going up on my way down. I sure hope they had a safe journey down on the other side.

I came to an area that felt like a game of snakes and ladders. This snake was from the top of the board right down to the bottom, where the ride could of been a “game over” sort of deal. My hips were happy to be at the bottom of that section. The air immediately got cooler at the bottom and leaves started making some much welcomed noise. It was not far till I was able to branch off to the deep, clear turquoise pool. Truly what dreams are made of. Places the internet shows you and you feel you may never see. You envy people living in certain parts of the world, able to bathe and swim in such areas in nature as they please. 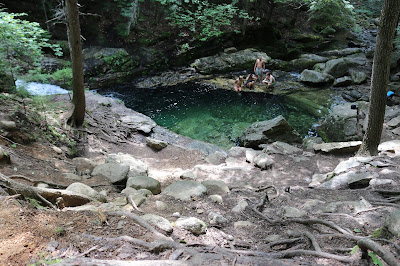 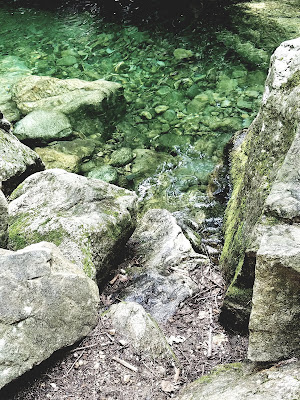 The air was so cool, your body temperature went right down. Almost did not wish to swim in the icy cold pool but there was no choice. You don't seek such wonder to not experience it. It was so cold, and I mean COLD. I've jumped in the ocean many of times as well as swam under waterfalls in October and nothing compared. I expected ice to come shooting down the falls. It would please polar bears. I am use to your body adapting after a while but in this case it did not.

My feet were pink and in pain. Talk about feeling alive, or awake, I was definitely present in that moment, ouch! I sat for a while after my dip, trying to ignore the pain and just move my feet about for a bit, gaining more energy from such a powerful place. I watched a brown dog jump off the side a dozen of times, so happy and energetic. It was a beautiful spot, beautiful moment and reminder. 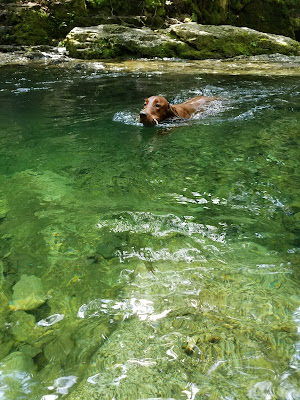 I truly do wish to return for a swim again. After deciding I had sat long enough, came the struggle of “wet frozen stiff foot back into socks and shoes game.” It was not too bad but was hard to walk for a moment. It was a little bit of a climb out from the bottom where the pool was, but not bad walk back out from where i had branched off. The trail widened for the last leg which was welcomed after putting my body through all that.

I ended the hike at a farm clearing, the sky was so blue and I paused for a moment to take a photo and take it all in, “what I had just done?” Took time to reflect and take with me my last moment of the day before leaving a place I will forever cherish as my own. 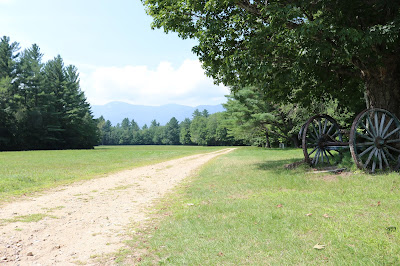 As I walk back to the car, I shake my head in disbelief and smile to myself... all for the love of blueberries!

"And those who were seen dancing were thought to be insane by those who could not hear the music." 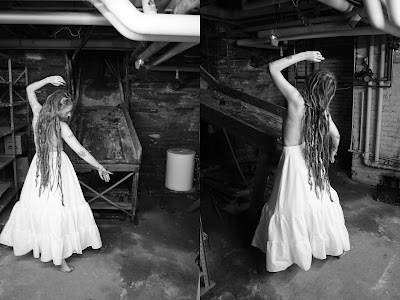 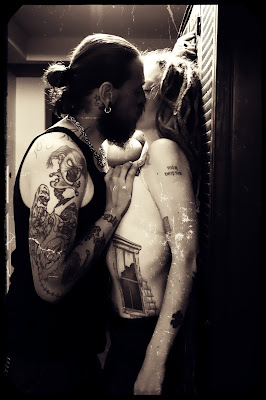 What if it all disappears in the shadows 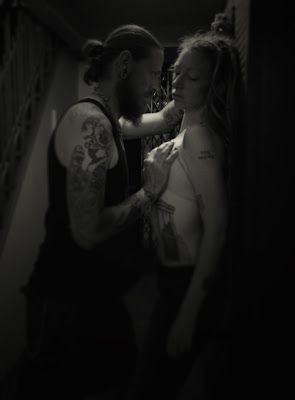 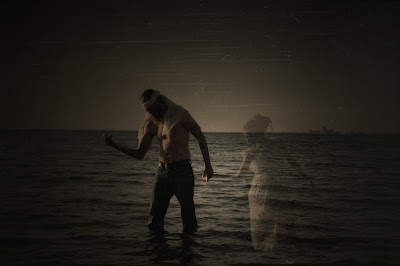 in the rest of my dreams i was betrayed 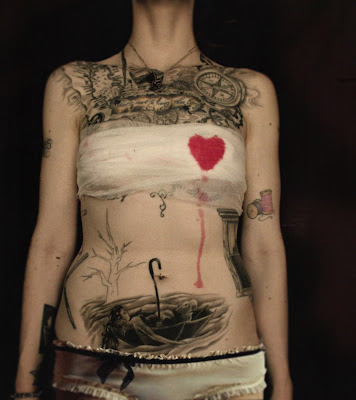 sooo many tears shed without you 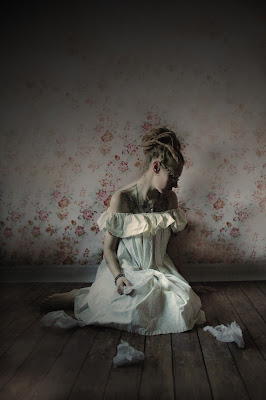